A History of Boddington

The spelling of Boddington has changed over the centuries from Botendon in Domesday Book (1086) through Bottelendon (12th century Survey of Northamptonshire), and Budinton in the Calendar of Close Rolls (1244) to Botyngdon (1358), Botyndoun (1396) and Botyngdon (1428). When it became established as Boddington we do not know, but on some 19th century maps it was spelled with only one d. The origin of the name could be Botas Hill (dun) or, as Baker surmises, it could be compounded of Boten, a contraction of the Saxon plural of botl, a habitation, and dune or done, a down, which corresponds with the situation of the upper village.

At the time of Domesday Book, there were two major landowners of Boddington, the Count of Mortain (half brother to William the Conqueror, and the largest single landowner after William) and Williams nephew, Earl Hugh. Both of these men let their lands. Previously the lands had belonged to Saxons, Turi and Aschil, freely. By the 12`" century this land had passed to Fulc Paynell, the Fee of Chester, William Meschin and the Fee of the Bishop of Lincoln. 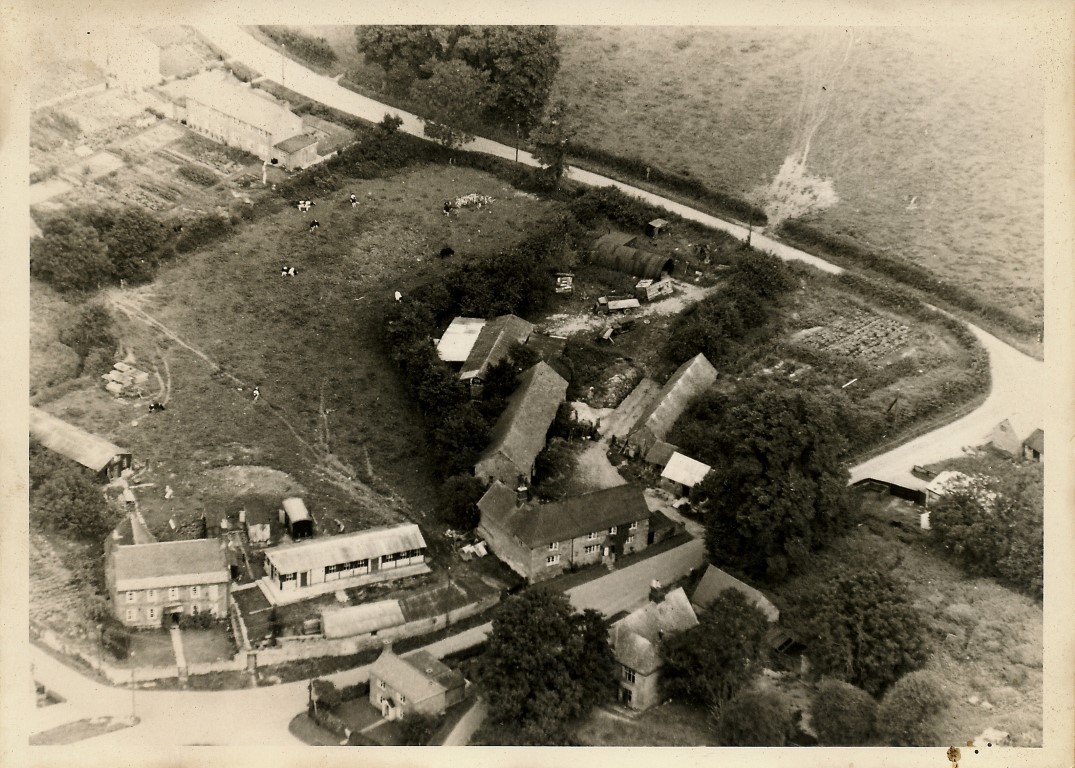 In medieval times each village had its own land and field system. Evidence of medieval earthworks has been found in both villages, and until recently could still be seen in the large field at the junction of Townsend Lane and London End in Upper Boddington where there was a long hollow-way running from London End to Chapel Lane.

The villages appear to have had separate common fields, but both were enclosed under a single Act of Parliament in 1758. Ridge and furrow in these fields exist on the ground or can be traced on aerial photographs over almost the whole Parish, except in a small area north of Upper Boddington known as Little Common. A segment of the Parish Award Map can be seen in Mr. Bromets book based on the Rev. Maynards memoirs.

In the late 15th or early 16th century the Lord of the Manor was ‘probably Richard Empson, courtier to Henry VIII’, whose sister married William Spencer of Wormleighton, ancestor of the Earls of Sunderland (and Princess Diana). The manor and estate came into the Spencer family in the mid-1500s and belonged to them until 1706, when it was disposed of by Anne, Dowager Countess of Sunderland. The Rev. Maynard deplores this event as few people could afford to buy their homes and when the rents inevitably rose ‘it brought many strangers tenants not much to the good of the town’. A lot of the land in Lower Boddington was retained by the Spencer family, and some was bought back in 1735, but has since been sold. 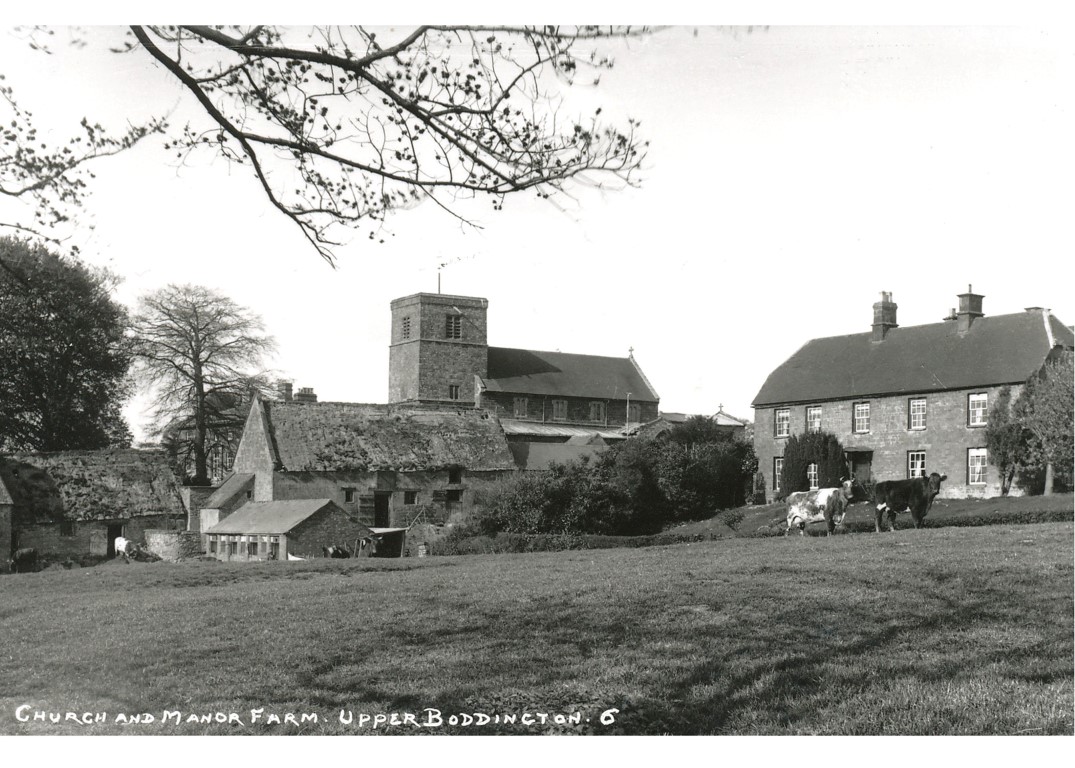 The Manor House and farm, next to the Church in Upper Boddington, were sold in 1706 to John Smith, a famous mezzotint engraver, favourite of Sir Godfrey Kneller, who did a portrait of John Smith a print of which may be seen in the National Portrait Gallery. John Smith was born in Daventry, worked in London for many years, and obviously decided to return to his native county on retirement. He is buried in St. Peter’s Churchyard, Northampton, with his wife and children.

The Church, dedicated to St. John the Baptist, is mainly 15th century, but has examples of three styles of architecture - Early English, Decorated, and Perpendicular - the tower being the last of these. The Church is described in Pevsner’s Northamptonshire. A church treasure is an ancient wooden dug-out chest, banded with iron. The registers date from 1558, the oldest being kept in the Northamptonshire Record Office at Wootton Hall in Northampton.

The church bells last rang at St. John the Baptist in 2004, when it was noted that the church tower was about to descend on the congregation. In December 2007, a committee of stalwarts led the village in a frenzy of well supported, and successful, fundraising events aimed at restoring the tower. The sum of £130k was raised in a period of two and a half years, including a grant of £41k from English Heritage and smaller donations from approximately twenty other charities. In 2008 the extensive restoration of the tower was completed; and it was made fit for the re-hanging of the five bells. There is room in the tower for six bells, so a new bell was cast and all six bells were installed in the church. After a silence of six years, the bells of Boddington now ring out again calling the faithful to prayer.

The population of the village fluctuated considerably in the 19th century. In 1801 it was 476, but rose steadily to 926 in 1851 and then declined until, in 1901, it was back to 487. The reason for this must have had to do with the poor conditions of the farm labourers who left the land to go to the towns. In the rioting of 1830-31, ricks and threshing machines were destroyed on farms in Boddington. In 1834 the wage of a Boddington labourer was 10 to 12 shillings a week, with beer, in the summer, and only 8 to 9 shillings a week, without beer, in the winter. 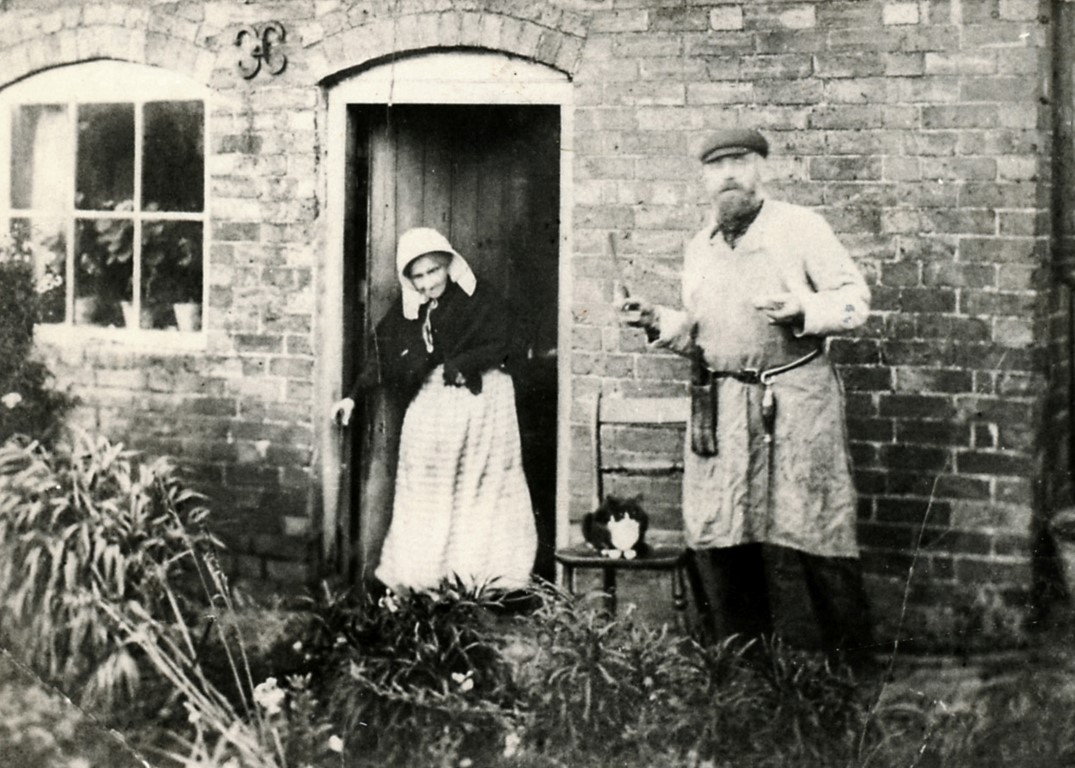 In his paper on Methodism in Boddington, the author attributes the growth of Methodism in the area in part to these conditions, as a protest against the status quo as represented by the Church. The first certain date for the arrival of Methodism in Boddington is 1797, when a licence was obtained for a meeting house. We have reason to believe that one of these houses was the Bakehouse in Upper Boddington (now Peel Cottage). The first chapel still stands: it is the building attached to the Old Post Office in Lower Boddington. When this became inadequate for the numbers of people, a chapel was built in 1865, in what was then called Cox’s Lane, Upper Boddington (now Chapel Lane). In 1885 Mr. Cherry of Lower Boddington gave land there for a new chapel. This is now converted into a house, but the chapel in Upper Boddington is still in use. In 1870, the year of the first Education Act which provided education for all, the Rev. Edward Sale undertook to build a school as there was none in the Parish. He gathered contributions from many people and paid some £260 himself toward the cost of £718. 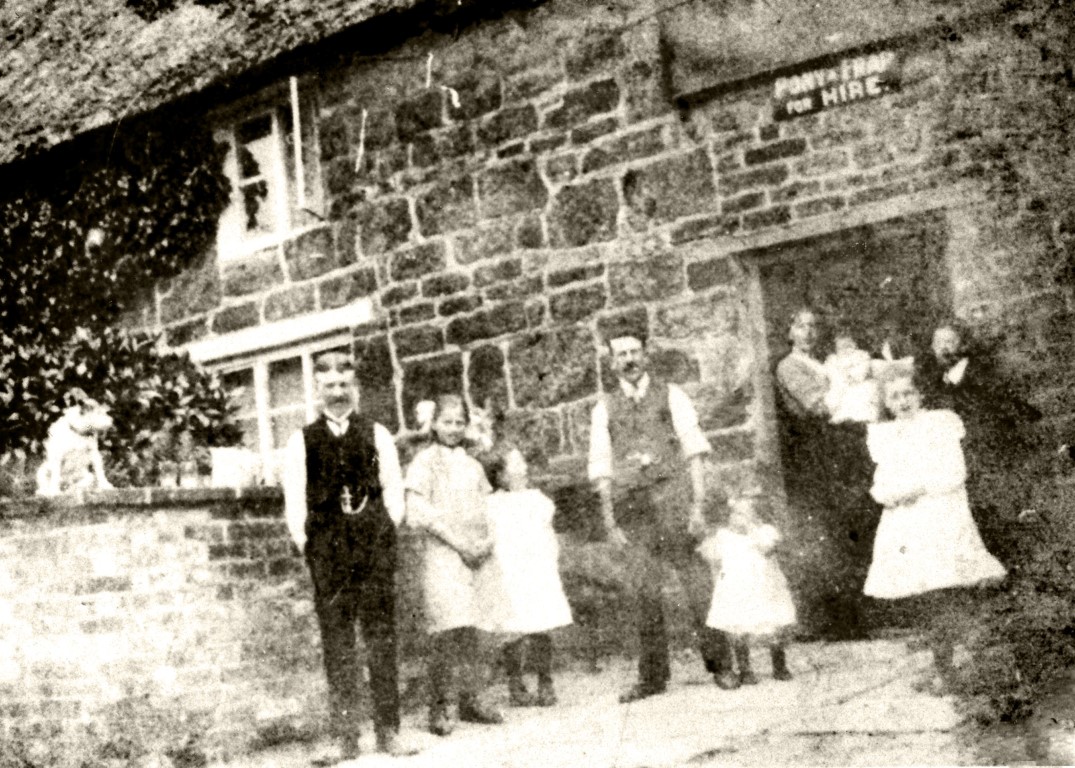 In the course of conversation with residents of the two villages, many interesting facts have come to light. For instance, up until the early 1900s there were houses and another public house, The Star Inn, at the bottom of Townsend Lane near the Pleck. The Manor House in Upper Boddington lost a top storey when a ‘flaming bomber’ crashed into it at the close of the last war, and a cottage which once stood on the hill above the bend at the top of Hill Road (near the new buildings of Cleveland Farm) was once inhabited by ‘refugees’ from Belgium during the 1914/18 War.

New buildings continue to appear in both villages. Old ones are brought up to date and improved. Some are redundant and some disappear. New faces appear to add to the succession of those who have come and gone throughout the centuries - history continues.

The Parish Council can be contacted via the clerk, Mrs Deborah Sanghera